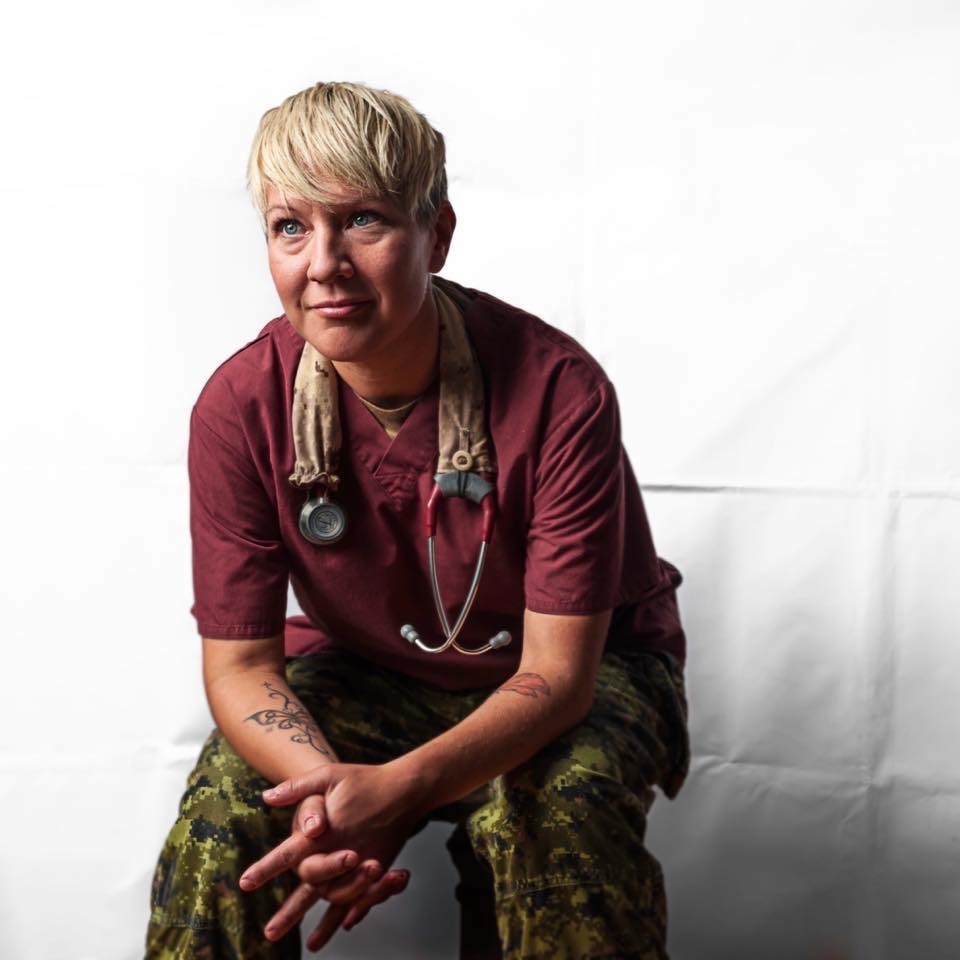 Captain (Retired) Mary Ann Barber is a passionate healer who has saved countless lives all while working in conditions that would send many of us running for cover. Her work overseas took its toll and she was medically released 2018. But shortly afterwards, she finished her Masters of Nursing, and since graduating she has worked across Canada as a Nurse Practitioner, in far flung places including Wasaga Beach, Baffin Island in Nunavut, and Interior BC. On this episode of For Her Country, Mary Ann shares her journey and words of wisdom for self-care and healing.

Captain Mary Ann Barber was born and raised in Sault Ste. Marie, On, and began her career in the Canadian Armed Forces under the Regular Officer Training Plan, enrolling in June 1997. Upon graduation from her BScN from the University of Ottawa in 2000, she was posted to Canadian Forces Base Edmonton where she began her career working as a new grad nurse in the ER and in a variety of military environments.

Captain Barber went on her first deployment to Bosnia-Herzegovina as a Critical Care Nursing Officer where she assisted in the management of the Unit Medical Station in Velika Kladusa in September 2002. Upon her return in April 2003 she began working in the ICU, and completed her certificates in Emergency Nursing, Forensic Nursing and Critical Care Nursing from Mount Royal College in 2004. Capt Barber deployed to Kabul, Afghanistan as the Nurse In-Charge (IC) of the Resuscitation department from January to July 2005.

In 2006 she was posted from Edmonton to Kingston, Ontario, where she became the team leader for the Care Delivery Unit at the Royal Military College of Canada. In 2007 she deployed to Kandahar, Afghanistan to the Role 3 Multinational Medical Unit (R3MMU) for 4 months, returned home for 6 months and then redeployed to Kandahar in January 2008 as the 2nd In-Command of In-Patient Services at the R3MMU. Following her return from Afghanistan in September 2008, she continued to manage the operations department at 33 Canadian Forces Health Services Centre in Kingston.

When she was not working on her year-long french course, or in the field, Capt Barber flew several medical evacuations from Germany to Canada, returning our critically wounded patients home. She was posted in August 2010 to Geilenkirchen, Germany where she managed the immunizations department until she returned to Ottawa in the fall of 2011. In Ottawa, Capt Barber was the department manager for Immunizations and the treatment room until she was moved in June 2013 to Canadian Forces Base Borden. At the Canadian Forces Health Services Training Centre, Capt Barber managed the Medical Technician Qualification Level 5 program, the Basic Medical Officer Course, the Primary Care Nurse Course and the Basic Nursing Officer Course. She also taught on the Physician Assistant Course, and on all clinical courses conducted at the training centre.

In the summer of 2017 she participated on the Douglas Expedition with True Patriot Love and paddled the Keele and Mackenzie rivers in the NTW. It was a life changing trip! In February 2018 Capt Barber was medically released and she finished her Masters of Nursing and Nurse Practitioner program from Athabasca University in August 2018.

Since graduating she has worked in a variety of locations as a Nurse Practitioner including The South Georgian Bay Community Health Centre in Wasaga Beach, in remote northern communities on Baffin Island in Nunavut, and for Interior Health in BC. She has also been hired with First Nations Inuit Health Branch in Alberta and Ontario. She continues to be an advocate for PTSD, especially within the health care community, and is featured in two documentaries, I Am War and Forged In Stone.

Mary Ann moved to Vernon, BC in June of 2019 and when she’s not working, she is travelling, active outdoors in a variety of interests and spending time with her friends and family.