Episode 8 – Lt(N) Jenn Martin on rising to the challenge

Lt(N) Jenn Martin on rising to the challenge 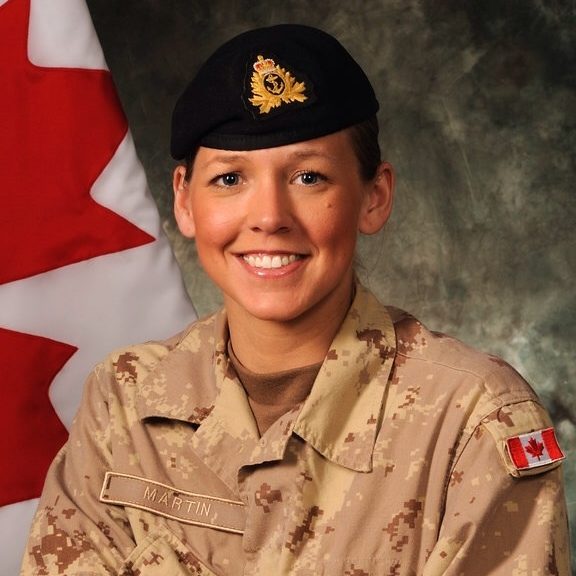 On this episode of For Her Country we spend time at sea with Lt(N) Jenn Martin, who joined the Canadian Armed Forces in April 2004 as a Maritime Surface Officer and managed to deploy to Afghanistan, a mission in a landlocked country, in 2010.

Following Operation Connection she worked as a platoon commander for new recruits at CFB Borden, overseeing the graduation of over 200 recruits into the Canadian Armed Forces. During that time, Lt(N) Martin completed both the General Military Training course as well as the Rappel Master course.

In May 2010 Lt(N) Martin deployed to Afghanistan as a member of the NATO training mission-Afghanistan (NTM-A) and the Combined Security Transition Command-Afghanistan (CSTC-A). During her eight month deployment, Lt(N) Martin worked closely with coalition forces to better the Afghan forces in combat and non-combat roles. After gaining the attention of senior American military officials, she was given the additional tasks of recruiting women, creating training for women and building infrastructure to ensure the border police could accommodate a mixed gender force. Liaising with American mentors, Lt(N) Martin was able to successfully graduate female border police from the first ever co-ed basic police training course. She liaised with the Minister of Interior in Afghanistan as well as top ranking Afghan police to build infrastructure to support the transition of women into the border police. In addition to her knowledge of training and development, Lt(N) Martin took a keen interest in the welfare of local Afghans. Utilizing her spare time, personal income and connections at home, Lt(N) Martin worked in her down time to support local Afghans. Working in conjunction with an American Sergeant-Major, Lt(N) Martin raised over $15 000 in school supplies to outfit several thousand students in Afghanistan with the basic means to attend and be successful in school.

Lt(N) Martin earned an Army Commendation medal from the United States Army for her tireless work in Afghanistan and willingness to take risks. In addition, she earned several coins of achievement for her work with the Border Police and school supply efforts. She was also recognized in Canada and presented with the Chief of Defence Staff coin for her work in Afghanistan.

Currently Lt(N) Martin works at a staff officer for the Naval Reserve Central Region Team, where she oversees the implementation and standards of training requirements across all trades.