Trying Your Hand at Something New

He recalls his years in the military as being some of the most important in his life, noting that the training and development he received was “formative” and helped provided him with stability and connection. “You develop lifelong friends in the military, it’s a family.”

His journey in the military started when he finished high school. Growing up, Dave recounts how he was raised in a rather nomadic lifestyle, moving around with his family as his father searched for jobs. “My family was not able to afford to send me to school at any level after high school, so I applied to the Army, was accepted, and never regretted that decision for a minute.”

More recently, Dave decided to try his hand at something new by getting involved with the True Patriot Love’s Creative Arts funded guitar program, through Soldier On. Venturing into the world of learning music was something new for him, but when Dave saw that the program was being offered – he applied. The guitar training consisted of 10 lessons in total, with each lesson occurring on a Thursday night.

But why music lessons? To Dave, there was a newfound sense of creativity and freedom that came with playing music. Everything else he’d done before, as he puts it, “was on the straight and narrow”.

“I’ve never done anything in my life involving music, so this is a totally different exercise for that side of my brain. It keeps my brain sharp, and I love every minute of it”. According to Dave, playing music and acquiring a new skill at the age of 78, activated a new way of thinking for him. “After a lifetime of work, and being a linear thinker, I needed to do something creative to keep my mind and body healthy”. Living at home with his wife of 47 years, Dave playfully notes that learning how to play the guitar is a lot more fun for him than it is for those listening. “Fumbling fingers and missed notes are hard on the ears.”

Today, Dave continues to remain very active in his support of the military, especially the Canadian Military Engineers Association through his involvement with the executive council. Having worked with them for over 12 years now, they’ve become his second family. You can read his full bio here.

“To the people that support the True Patriot Love Foundation and Soldier On – I can only say thank you from the bottom of my heart. This experience has opened up a new side of my life at this stage, and I am loving what I am learning from it every day.” 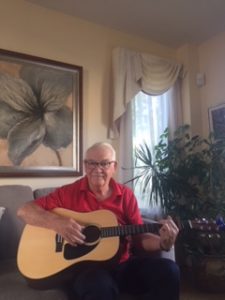