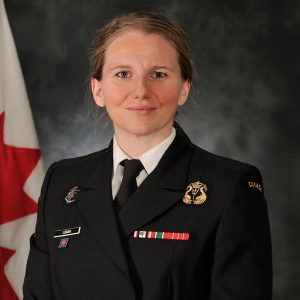 With a team of civilian and military women, Lieutenant Commander Kathryn Logan battled the northern winds and rough terrain to snowshoe 100 kilometres across the Arctic. As exhaustion began to creep in and the snowshoes got heavier, the idea of quitting never crossed her mind.

This journey was like no other. It was the first-ever all women Baffin Island expedition, which would raise crucial funds for the military and Veteran community and shed light on the unique challenges the community faces due to service. It was also an opportunity to empower women and celebrate the strength they have within.

“Having been in the military for most of my adult life, I don’t always get to work with a lot of women so it was interesting to learn that even though we worked in different sectors we still experience some of the same challenges. It was nice to hear each other’s stories and support one another,” LCdr Logan said.

LCdr Logan finished the expedition, which raised $1 million for members and Veterans of the Canadian Armed Forces. In the process, she was able to draw on her military training to help her fellow teammates complete the journey.

As a Logistics Officer and a qualified Ship Diver, LCdr Kathryn Logan has led the logistics department onboard Canadian warships and a diving team, and served with the Canadian Special Operations Forces. She has deployed on numerous occasions, including tours in Afghanistan, the Arabian Gulf and throughout the Asia-Pacific region. For her work overseas, she received a Task Force Commander’s commendation and was presented a Task Force Commander coin.

LCdr Kathryn Logan continues to empower and support women through her work with the True Patriot Love Captain Nichola Goddard Leadership Series. This event, which takes place in Toronto, Calgary and Vancouver, raises awareness about gender diversity, leadership and resilience in the Canadian Armed Forces and is a fundraising initiative for the Capt. Nichola Goddard Fund. The fund provides national grants to community programs that support servicewomen, Veteran women and families in need. Founded by the Goddard family and managed on the family’s behalf by True Patriot Love since 2018, the fund is in honour of Captain Nichola Goddard, who at age 26 became the first Canadian woman soldier to die in a combat role.

As one of the speakers for the Toronto and Vancouver receptions, LCdr Logan highlights the importance of women in leadership roles in the Canadian Armed Forces and sheds a light on the challenges that they can face.

“The reception is really important as it draws attention to the difficulties women in the military go through and provides a platform for servicewomen and Veteran women to share their experiences. Many people may not know what we at times go through,” states LCdr Logan.

LCdr Kathryn Logan is a great example of a leader and is continuing to make a positive impact in the lives of women.

Donate today and help us continue to provide vital support to women in the military and Veteran community.