Captain Nichola Goddard was a true example of leadership. As an Artillery Officer she effectively led her unit through harrowing situations, supported her comrades, and was highly respected by her peers. Sadly, in May 2006, she was killed in an ambush in Kandahar, Afghanistan, making her the first Canadian woman soldier to die in a combat role. She was 26 years old.

You can support the fund by making a donation here.

The Call for Proposals to the Captain Nichola Goddard Fund is Open!

Should you have any questions or would like to learn more about the grant, please reach out to us at funding@truepatriotlove.com.

True Patriot Love’s Commitment to Women in the Military

Women are vastly underrepresented in the military and account for only 15% of the Canadian Armed Forces. Servicewomen of the Canadian military face unique challenges related to their service such as a higher risk of military-related sexual assault than the servicemen that are their counterparts, and a higher likelihood of mental injuries such as post-traumatic stress among women who report military-related sexual assault. In addition, 40% of the military personnel released each year will experience a psychological injury requiring support and treatment, and Veteran women have an 81% higher risk of suicide than women in the general population.

To date over $860,000 has been committed from the fund, which has supported initiatives such as the following:

In 2018, True Patriot Love hosted the inaugural Captain Nichola Goddard Reception. Guests gathered to pay tribute to women in the military and heard from a panel of successful women as they shared their stories of courage and leadership and touched on their unique experiences in the Canadian Armed Forces. The sold-out event included over 180 attendees and raised over $56,000 for the Captain Nichola Goddard Fund.

Building off this success, True Patriot Love hosted another reception in Toronto in October 2019, as well as receptions in Calgary and Vancouver in 2020. Combined, these events formed the Captain Nichola Goddard Leadership Series and raised over $120,000 for the fund.

Learn more via our For Her Country Podcast

True Patriot Love has also launched a new podcast entitled For Her Country. The podcast is in honour of Capt. Nichola and aims to inspire and educate listeners by profiling some of these inspirational women leaders in the Canadian military. To listen, click here. 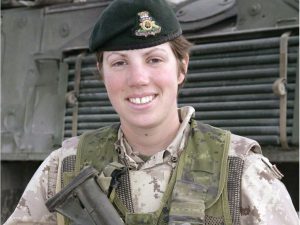