Getting Family Support with PEI MFRC

Currently, Ben continues to work in the military, now as a Troop Warrant Officer. He has also joined Veterans Affairs Canada in 2018 and works as a Veteran Benefit Team Manager. His team in the Centralized Operations Division processes the disability benefit applications for the CAF-DND Sexual Misconduct Class Action Settlement. While helping other Veterans like himself, Ben also finds support from the PEI Military Family Resource Centre (MFRC), a partner program of True Patriot Love.

Ben has primarily stayed with the Prince Edward Island Regiment, and also attended and graduated from the University of PEI with some financial assistance through the Primary Reserve Education Reimbursement. The reserves provided him with summer employment and part-time training employment during the rest of the year, something Ben very much enjoyed.

The military allowed him varied experiences and the chance to be involved with something much bigger than himself.

The military instilled the warrior code of ethics and ethos in Ben and provided him with opportunities to travel and learn more about the world. Though he spent most of his time in PEI, Ben also served in Afghanistan for 6 months in 2007. He enjoyed working with his team and learning to be a leader—a skill he is still using today working for Veteran Affairs Canada. 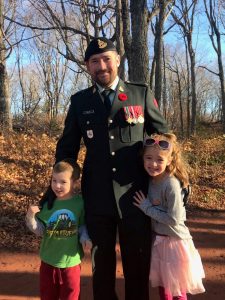 Through the support of True Patriot Love, PEI Military Family Resource Centre (MFRC) was able to provide Ben and his family with the support they needed. When his daughter was born with a cleft lip, PEI MFRC was able to assist with some of the upfront costs of the medical travel expenses. Ben’s daughter is now 7 and has a little brother who is 5 1/2.

And it’s not just financial support that PRI MFRC provides; through the numerous family retreats, summer camps, and Christmas parties, Ben’s family was able to connect with other families and build a support system in the community.

When Ben wasn’t sure about being able to send his kids to the Island Montessori Academy summer camps for 6 weeks, he was able to turn to the MFRC again. Through the camp funding, his daughter and son were able to attend the fun themed camps. This was a huge help and took the pressure off Ben and his wife.

“It’s a relief that organizations like True Patriot Love are there in the background to help with some of the struggles of families and recognizing the dedication of CAF members,” Ben says.

Your generous donations allow True Patriot Love to support Military Family Resource Centres across the country. We understand that challenges associated with transitioning to civilian life include the entire family, which is why we are committed to supporting programs that help Veterans and their families foster connections within the community.