Virtual Fireside Chat:
75th Anniversary of the end of WWII

From winning the Battle of Scheldt, which kept the supply lines open for North Europe, to freeing the Western Netherlands, Canada played a critical role in the Second World War. Thanks to their resilience and fortitude, on May 5, 1945 at 4:30 p.m. the First Canadian Army Orders to German Commanders on Surrender was signed. The signed agreement marked the liberation of Holland from Nazi occupation and later the end of the Second World War.

On May 5, 2020 at 4 p.m. EST, 75 years later, we commemorated this monumental moment in history and paid tribute to over 1 million Canadians who fought in the War through an interactive Virtual Fireside chat.

Attendees heard from an esteemed group of Veterans including former Chief of the Defence Staff General (Retired) Rick Hillier, decorated WWII Veteran Captain (Retired) Martin Maxwell and former Invictus Games athlete Corporal (Retired) Kelly Scanlan as they shared their perspective on the leadership, teamwork and resilience from the war and shun light on how the lessons from the past can help us navigate the current global pandemic.

We also heard from WII Veteran Captain Martin Maxwell as he shared the importance of supporting our military and Veteran community. In an effort to raise more funds for military members, Veterans and their families, Capt. Maxwell has started his own GoFundMe page, which will help True Patriot Love continue funding programs that provide life-changing support to our brave individuals in uniform.

In case you missed the Virtual Fireside Chat, below you will find the full discussion: 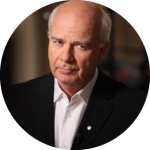 Peter Mansbridge is an award winning journalist, a Distinguished Fellow at the Munk School of Global Affairs at the University of Toronto and a member of numerous boards and committees. He is best known for his five decades of work at the CBC where he was Chief Correspondent of CBC News and anchor of The National for thirty years. He has won dozens of awards for outstanding journalism, has thirteen honorary doctorates from universities in Canada and the United States, and received Canada’s highest civilian honour, the Order of Canada, in 2008. He is the former two term Chancellor of Mount Allison University and is currently the President of Manscorp Media Services where his work includes documentary film production. He is also the author of the 2009 national best seller, “One on One”.

Click on the picture to learn more about each panelists.

Born in Newfoundland and Labrador, Rick Hillier joined the Canadian Forces as soon as he could through the Regular Officer Training Plan and graduated from Memorial University of Newfoundland, where he recently served as Chancellor. After completing his officer training, he joined his first combat unit in Petawawa, Ontario before subsequently serving with, and later commanding, the Royal Canadian Dragoons in Germany and Canada.

Throughout his career, General Hillier has had the privilege of commanding troops from the platoon to multi-national formation level within Canada, Europe, Asia and the United States. In 1998 Hillier was appointed as the first Canadian Deputy Commanding General of III Corps, US Army in Fort Hood, Texas and in 2000 took command of NATO’s Multinational Division (Southwest) in Bosnia.

In May 2003 Hillier was appointed as Commander of the Army and later that year was selected as the Commander of NATO’s International Security Assistance Force (ISAF) in Afghanistan. Hillier was promoted to General and appointed Chief of the Defence Staff on 4 February 2005. He retired from the Canadian Forces 2 July 2008 after 35 years, three months, two days and 14 hours wearing Canada’s uniform.

In his new life, Rick focuses on leadership and charitable endeavours. Rick and his wife Joyce have two sons, Chris and Steven, two daughters in law, Caroline (Chris) and Amanda (Steven), two grandsons, Jack and Matthew (Chris and Caroline) and a granddaughter, Olivia (Steven and Amanda) to love. Rick and Joyce reside in Ottawa, often in Newfoundland, and, during those chilly Canadian winters, in Florida.

Captain (Retired) Martin Maxwell is a decorated World War II Veteran. Born Max Meisels on March 26, 1924, Capt. Martin Maxwell was raised in an impoverished family in Vienna Austria. On December 31, 1938, Martin was evacuated to England on the Kinder Transport.

When he came of age, Martin Joined the Royal Air Force and trained as a glider pilot. A day before D-Day, Martin flew a glider plane of 22 highly trained soldiers to capture Pegasus Bridge and prevent the Germans from sending reinforcement from the rear. Three months later he flew into battle at Arnhem, Holland and was captured as a prisoner of war, later to be liberated at the end of the Second World War.

Following Germany’s capitulation on V-E Day, May 8, 1945, he was tasked as a German-speaking British Officer with investigations relating to the Nuremberg War Crimes Tribunal. Martin retired from the Royal Air Force with the rank of Captain. He was awarded some of the highest honours, including the Queen Elizabeth II Diamond Jubilee Medal and the Legion of Honour from France.

Today, Martin lives with his wife Eleanor and is the proud father of two, grandfather of five, and great grandfather of two. Martin continues to deliver emotion-filled speeches about his life at various schools, universities, churches, synagogues, and other interest groups. He finishes each presentation, stating: “There are so few of us left, I am handing over to you the Torch of Freedom. Hold it high so that others can see it. If ever you are called upon to defend freedom, do it with everything you have because once freedom is lost, it is nearly impossible to recover. It took us five years and millions of dead and wounded to keep our freedom and give it back to you.” These words were first spoken, in 2010, on the 65th anniversary of the end of World War II, where Martin was invited to speak in Apeldoorn, Holland. Ten thousand people, including the Dutch Royal Family, attended.

Kelly Scanlan joined the Canadian Armed Forces in 2007 as an Infantry soldier with the Army Reserves. In 2010 she deployed to Afghanistan as part of Taskforce 1-10 when she was nineteen years old. After returning home Kelly struggled for several years with physical and mental injuries that were a result of her time in Afghanistan. These injuries had long lasting impacts on her life but Kelly was able to eventually overcome them with the help of several Veteran organizations.

Kelly represented Team Canada at the 2017 Invictus Games in Toronto where she won a bronze and gold medal in swimming. This training helped push Kelly to take on new challenges and in 2017 she started a new career as a Firefighter. Kelly also took on the challenge of climbing to Everest Base Camp in Nepal as part of the True Patriot Love Expedition in 2018. This is where she spent her final day as a Canadian Forces solider.

When Kelly is not working as a firefighter, or talking about mental health awareness in her local community, she can be found volunteering as a part of Team Rubicon Canada. Team Rubicon Canada is a disaster response team that uses the skills and experience of Veterans to continue serving the global community. Kelly has deployed with the team several times within Canada, the United States and to Uganda helping in the aftermath of tornadoes, floods, and humanitarian crises.