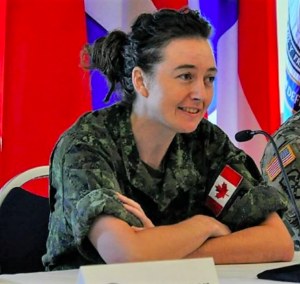 Major Jaime Phillips shares her experience attending the Royal Military College with Captain Nichola Goddard and discusses the challenges she faced as the first female artillery troop commander deployed to Kandahar. Jaime reminds us that sometimes you just need to accept that not everyone is going to like you, but that this can help build your leadership and resiliency.

She has served with the 2nd Regiment, Royal Canadian Horse Artillery, and the Royal Regiment of Canadian Artillery School, where she completed various tours of duty including Troop Commander, Adjutant, and Battery Commander.

Jaime has a passion for learning and teaching others and has been an Instructor at the Royal Regiment of Canadian Artillery School as well as the Western Hemisphere Institute for Security Cooperation.

In 2007, Jaime deployed to Afghanistan where she commanded an artillery troop and worked closely with coalition forces.  Canada, at this time, was focused on establishing security in advance of an anticipated Taliban spring-offensive.

Jaime holds a Bachelor of Arts (Honours Military and Strategic Studies, Minor in Military Psychology and Leadership) and a Master of Arts (War Studies) from RMC. She also has a Master of Science (International Relations) from Troy University, and is in the midst of a part-time Doctoral program through RMC’s PhD War Studies program.

Maj Jaime Phillips is a Member of the Order of Military Merit and is currently working at Canadian Army Headquarters in Ottawa.