The embodiment of resilience 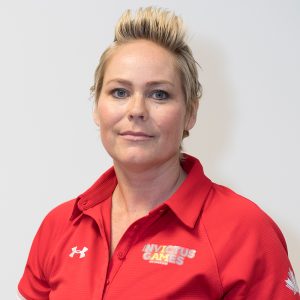 After all you’ve been through, how are you able to participate in the Invictus Games? There is no hesitation in Sergeant (Retired) Alannah Gilmore’s voice when she answers this question. Had she hesitated it would have been understandable.

Sgt. Gilmore was medically released from the military for physical and mental health injuries in 2015 and diagnosed with stage three breast cancer in 2018 – the same year she was accepted to be part of Team Canada at the 2020 Invictus Games in The Hague.

“If I don’t and I can, what happens to those who can’t? I want people to see that recovery, even in the slightest form, is possible,” she answered confidently.

During her 23-year tenure in the Canadian Armed Forces as an Army Medic, Sgt. Gilmore trained hundreds of soldiers and was deployed to Canadian Forces Station Alert and Afghanistan as a front-line medic. For her tireless work she received four commendations from the Commander in Chief, Chief of Defence Staff, Chief of Military Personnel and her Commanding Officer. But despite her high aptitude, she still faced challenges because she was a woman.

“There were many times that I had to over-prove that I was capable of doing my job because I was a woman. But I wasn’t going to back down. I wanted people to know that I’m more than capable, as are other women in the military,” Sgt. Gilmore said.

Even after being medically released from the military, this spirit of determination enabled her to apply for Team Canada to participate in the Invictus Games. As a member of Team Canada, Sgt. Gilmore is one of nine women on the team of 31 military members and Veterans.

Created by Prince Harry, Duke of Sussex, the Invictus Games is an international adaptive multi-sport event where ill and injured military members and Veterans participate in various sporting activities. The Games inspire rehabilitation and recovery and raise awareness for the military and Veteran community. In partnership with Soldier On, True Patriot Love Foundation will be supporting Team Canada at the Invictus Games in The Hague this May as part of the foundation’s commitment to assisting military members and Veterans as they journey to recovery.

“I’m excited to represent Canada and serve my country once again. It’s an opportunity for me to show people the perseverance of our community and of women in general.”

“From the moment I got diagnosed I told myself I am going to fight this and am going to raise awareness about the importance of cancer screenings,” stated Sgt. Gilmore. “Cancer and its permanent effects will change the way I participate in the Games. But the Invictus Games is about the journey of recovery and I want my daughters to see that anything is possible.”

When Sgt. Alannah Gilmore participates in the 2020 Invictus Games in May, she will be a beacon of hope for millions of people: women, military members, Veterans, those facing physical and mental health issues, and those who have been diagnosed with cancer. Not because she may outperform another athlete but because despite her circumstances, she chose to keep moving forward.

Donate today and help us continue to provide vital support to women in the military and Veteran community.