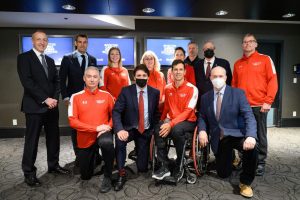 Last month, Prince Harry, Duke of Sussex, announced Canada as host nation for the first-ever winter hybrid Invictus Games. Today, the Governments of Canada and British Columbia committed $15 million each, in support of the Invictus Games Vancouver-Whistler 2025.  An additional $1 million will be provided to the Soldier On program to support Canadian Veteran participation in the Games from the Government of Canada.

Thanks to the successful bid from True Patriot Love Foundation, Canada will welcome more than 500 competitors from 20 countries to participate in the most innovative and accessible Games to date. For the first time, the Invictus Games will include adaptive winter sports like alpine skiing, Nordic skiing, skeleton and curling.

In the spirit of truth and reconciliation, the Invictus Games Vancouver-Whistler 2025 is dedicated to respecting territorial protocols and cooperating with local Indigenous communities in the planning, execution and participation of the Games.

The Invictus Games are a powerful reminder of the extraordinary courage and perseverance of all those who have been injured or become ill through their time in the military.

“I’m excited that Canada will host the 2025 Invictus Games. Today’s investment will help us welcome competitors from around the world to beautiful British Columbia to showcase their athleticism, drive, and competitive spirit. Canadians look forward to welcoming you once again.”

“We are proud to be bringing the 2025 Invictus Games to British Columbia. Alongside local host nations, we look forward to welcoming athletes to Vancouver and Whistler for the most accessible, innovative and inclusive Invictus Games yet.”

“Canada has a culture steeped in winter sports, many of which were first played by the Indigenous peoples of Canada. We look forward to welcoming the world to the inaugural winter hybrid Games in 2025. The inclusion of winter sports in the Games will provide new opportunities for the brave service men and women who so richly deserve every chance to compete.”

“We are honoured to host the Invictus Games and to celebrate the unsung heroes who have and continue to serve their countries with courage and bravery around the world. I truly believe sport is the great equalizer in our communities. I also believe sport has the power to heal and bring people together. By working together with all levels of government and the four local host First Nations Squamish, Lil’wat, Musqueam, and Tsleil-Waututh, we are supporting and advancing our shared commitments to accessibility, inclusion, tourism, and reconciliation. I can’t wait to welcome the outstanding athletes to our beautiful province and to cheer on our Canadian delegation.”

“This significant funding for the Invictus Games 2025, from both the Government of Canada and the province of British Columbia, shows the commitment to honour, support and celebrate not only Canada’s military community, but communities around the world. True Patriot Love is proud to have played a leading role in securing the Invictus Games 2025 Vancouver-Whistler. We look forward to continuing to work with all levels of government to ensure these Games support the recovery of all competitors and their families, as well leave a strong legacy of adaptive sport year-round.”

“Invictus Games 2025 will provide a platform to once again demonstrate how perseverance, determination, and unity can inspire, empower, and enable recovery and well-being. It also is an opportunity to reaffirm to ill and injured members of the Canadian Armed Forces, Veterans and those military communities around the world, that they are not alone, and need not to recover alone. The funding to Soldier On will further capitalize on this inspiration and allow the program to reach a wider audience, ensuring grassroots domestic opportunities and for all Veterans remain available from coast to coast to coast.”

“The Invictus Games are a wonderful opportunity to honour Veterans from around the world and a powerful reminder of the unparalleled sacrifices and bravery of military personnel, including those in our Canadian Armed Forces. I am proud that, in partnership with British Columbia, we have pledged $30 million to support the Games. I look forward to welcoming athletes, coaches, families and visitors to our country and showing them the best of Canada.”

“Canadians can all be proud that our country is a part of the Invictus movement. The Invictus Games let the entire world see the grit and determination of our Veterans and members of the Armed Forces. They remind us all that our injuries and disabilities do not define us. As a Paralympian, the wife of a veteran, and the mother of a serving officer, I know the difference that this investment will make in the lives of so many Canadians and families.”

“I can’t wait to see Invictus Team Canada make its mark in front of an enthusiastic audience on home turf in Vancouver and Whistler. The Invictus Games are the embodiment of diversity, inclusion, resilience and pride. Hosting the Games on Canadian soil will have a positive and lasting impact on host communities, the participants, and our reputation as a leading sport nation.”

The Honourable Pascale St-Onge, Minister of Sport and Minister responsible for the Economic Development Agency of Canada for the Regions of Quebec

“While Vancouver and Whistler are known globally, the tourism industry is now more competitive than ever, with hundreds of destinations worldwide competing for the same visitors. The additional exposure that Vancouver, Whistler, and all of British Columbia will receive as a host destination of the 2025 Invictus Games, has the potential to be leveraged for a significant competitive advantage, leading to stronger growth in visitation, a healthier tourism industry, and economic benefits around the province leading up to and following the Games. As the industry begins its recovery, and as Destination BC continues to support the development and improvement of accessible tourism opportunities around the province, we look forward to welcoming athletes and visitors to experience the BC Effect for themselves at the Invictus Games Vancouver-Whistler 2025.”