(Toronto, ON) November 6, 2015 – On Wednesday, November 4, Manulife made a $50,000 donation to True Patriot Love Foundation (TPL) which will be directed to military programs and organizations across Canada.

“True Patriot Love is sincerely grateful to Manulife for both honouring and supporting our Armed Forces, especially those who have made the ultimate sacrifice for their country,” said Jaime Wilson, VP of Development at True Patriot Love. “Together, we are committed to seeing positive change for our service men and women, Veterans and their families.”

Founded in 2009, TPL is dedicated to bridging the gap between the military and civilian communities by acting as a conduit that allows corporate Canada to show its support and appreciation for the brave military service men and women of the Canadian Forces. The funds from the donation will support military programs across Canada that address TPL’s four areas of focus: mental health and well-being, physical health and rehabilitation, family health and support and research and innovation.

“True Patriot Love and its network of sponsors and donors provide critical support for members of the Canadian Armed Forces and their families across Canada,” said General (ret.) Rick Hillier, former Chief of Defence Staff for the Canadian Armed Forces. “The programs that benefit from TPL funding provide our military men and women support in all aspects of their lives: relocating families closer to critical care, purchasing vehicles for seriously injured Veterans, therapy for mental health and wellness, assistance with children with special needs, assistance in Veteran transition to civilian life – to name a few.”

Just ahead of Veterans’ Week, Manulife held a commemorative ceremony to remember Canada’s fallen heroes. The ceremony took place at the Manulife Global Headquarters, where Manulife President and CEO, Donald Guloien, and Senior Executive VP and CIO, Warren Thompson, were on hand to talk about Manulife’s commitment to support Canada’s fallen heroes. ‘O Canada’ was sung during the ceremony by a choir of elementary school children from Rose Avenue Public School in Toronto.

“Canadians owe a great deal to those who serve our country in the armed forces,” said Donald Guloien, President and Chief Executive Officer, Manulife. “As a gesture of thanks and remembrance, we have created a flag garden in front of our Head Office, and we hope that people will have the opportunity to see this tribute to those who made the ultimate sacrifice.”

As a gesture of thanks and remembrance, Manulife revealed a flag installation on the front lawn of the company’s global headquarters. Over 11,800 Canadian flags were planted to honour more than 118,000 members of the Canadian Armed Forces who have fallen in service to Canada during wartime and on peace-keeping missions. The flag installation will remain in place until Wednesday, November 11. 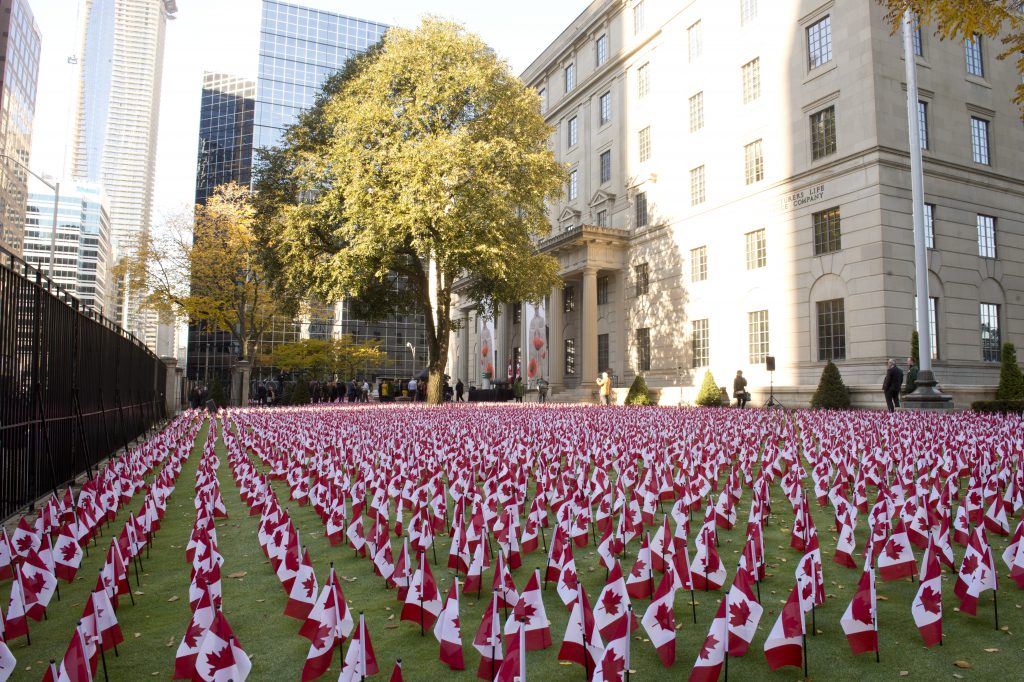 11,800 Canadian flags were planted to honour more than 118,000 members of the Canadian Armed Forces who have fallen in service

True Patriot Love Foundation (TPL) is a national charity that honours the sacrifices of members of the Canadian Armed Forces, Veterans and their families in both times of peace and conflict. TPL funds unique programs and innovative research in the areas of family health and support, physical health and rehabilitation, mental health and wellbeing, and research and innovation. TPL is also committed to bridging the gap between military and civilian communities, hosting multinational symposiums and organizing ambitious global expeditions. Since 2009, True Patriot Love has committed more than $15.1 million to support military charities and research across Canada. For more information, visit www.truepatriotlove.com.

Manulife Financial Corporation is a leading international financial services group providing forward-thinking solutions to help people with their big financial decisions. We operate as John Hancock in the United States, and Manulife elsewhere. We provide financial advice, insurance and wealth and asset management solutions for individuals, groups and institutions. At the end of 2014, we had 28,000 employees, 58,000 agents, and thousands of distribution partners, serving 20 million customers. At the end of June 2015, we had $883 billion (US$708 billion) in assets under management and administration, and in the previous 12 months we made more than $22 billion in benefits, interest and other payments to our customers. Our principal operations are in Asia, Canada and the United States where we have served customers for more than 100 years. With our global headquarters in Toronto, Canada, we trade as ‘MFC’ on the Toronto, New York, and the Philippine stock exchanges and under ‘945’ in Hong Kong.  Follow Manulife on Twitter @ManulifeNews or visit www.manulife.com or www.johnhancock.com.